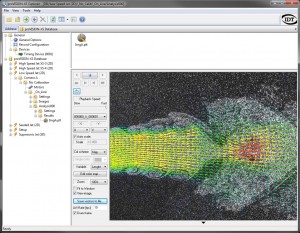 Particle Image Velocimetry (PIV) is an optical method of flow visualisation, where particles are tracked, to form a vector diagram, showing the flow pattern and flow rates of a fluid. It is generally carried out in 2D, but 3D PIV is a powerful tool for more advanced users.

PIV can be carried out in liquids or gasses; either way, the fluid needs to be seeded with particles which will be visible to the camera, and of the same density as the fluid. PIV imaging involves using pairs of images to gain speed and direction information to build up a ‘map’ which looks a bit like a wind map as presented by a weather forecaster – (if you think about it – that’s exactly what a weather map is!)

As many flow applications involve high flow rates, high speed cameras are often used for PIV applications. At the highest rates of flow, the particles will need to be lit using a pulsed laser. Continuous lighting may be possible at lower rates. Either way, sheet lighting is better as it makes calibration far simpler. The features to look for in a high speed cameras are:

All IDT cameras tick all of the above. IDT’s own ProVISION software and a comprehensive timing hub are included in the PIV editions of the Y-Series cameras

One thought on “Particle Image Velocimetry – see the flow”