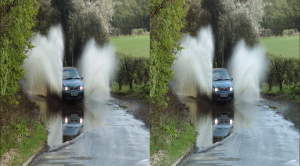 Producing a 3D movie is not as complicated as you might think. There are a few different formats of 3D file that are played on various devices. Here, I’ll explain how to produce a side-by-side movie, which seems to be the most common for playing on a 3D TV. A side by side movie made up from a pair of HD files (std HD is 1920×1080) will total 3840×1080 pixels, and as the name suggests, the image pairs are sewn together along side each other.