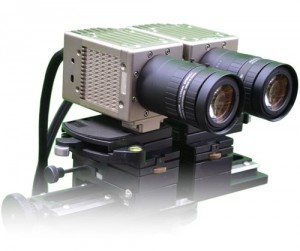 There are many reasons why you’d want to synchronise two or more cameras together including.

In either case, the camera configuration is the same. The cameras need to have ‘sync in’ and sync out’ connections. The sync-out from the master camera is connected to the sync-in on the slave(s). The master camera has to be assigned in the control software. Now your cameras are framing using the clock of the master camera.

Has my camera got sync in/out? Well, most high speed cameras do have these connections as multi-camera applications are fairly common in high speed imaging; only the most basic ones don’t. All IDT cameras do.

Usually, cameras are sync’d using cables. For three or more cameras, the networking cabling can get very messy by the time you have supplied each camera with power and distributed the control interface (Ethernet etc) and a trigger to each. Cameras hubs simplify this by offering a single cable to each camera, which carries power, sync, trigger and Ethernet. ‘Simples’. 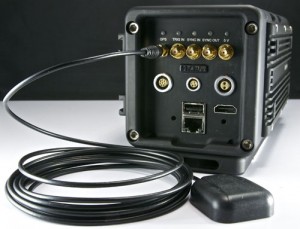 What if I don’t want cables. Can I still frame sync? Sometimes the distances are too great to lay cabling, or cables are impractical. You can still sync the cameras though, as long as they have IRIG or GPS capability. Using either of these technologies, the camera latches onto a satellites time signal. If more than one camera is set up in the same way, they are exactly sync’d to each other. NX-Air cameras, Y-Series cameras and Os Series cameras all incorporate GPS receivers, so are capable of wireless synchronisation. For more details on anything mentioned on this page, please contact IDT