Image resolution is measured in pixels – or picture elements; the dots that together make up the image. This article focuses on video resolution, although many aspects of course apply to still images too. 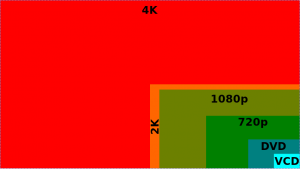 When digital displays first became commonly used, they tended to be VGA resolution (640×480 pixels). Over the last few years the resolution has steadily increased, with Full HD (High Definition, 1080p – 1920×1080 pixels) being most common. The chances are your flat panel TV and your computer monitor are both this resolution. The other change you’ll have noticed is the widening of the screen aspect ratio to 16:9 rather than 4:3 (the ratio of the horizontal to vertical dimensions)

Video cameras and camcorders have unsurprisingly followed these changes too. Today the vast majority of video cameras are full HD resolution.

2014 will see a big emphasis on the next resolution change – 4K. This resolution is 4x the resolution of HD, 3840×2160 pixels. As the demand for larger and larger TV screen sizes continues, 4K will become the norm for the larger sizes.

Several factors have been instrumental in the advancement of resolution

In high speed cameras, these three factors are pushed to the limits. Manufacturers such as IDT are continually pioneering faster and higher resolution sensors to include in their cameras. The data rates (a combination of resolution, frame rate and image depth) are significantly above standard video cameras. Standard video cameras generally frame at 25 or 50 images per second.

Two sensors are available from IDT with 4K resolution, both available in the Os Series camera. The Os10 can frame at up to 1,200 frames per second at 4K resolution. As the data rate is the limiting factor, the frame rate can be increased as the resolution is proportionally reduced.

That’s all very well, but what resolution do I need?

People get very hung up on resolution… “My phones got a resolution of 8 megapixels” we often hear, which sounds better than many decent digital cameras, which ‘only’ have 6 Mp sensors. Well, there’s a lot more to creating good images than just the resolution. The quality of the sensor, sensor noise, the lens; I could go on…

Choosing the best resolution for your application all depends what you’ll be using the imagery for. If you’re displaying on a monitor for general viewing, then HD is a good resolution to use, but a decent image of a particular event for scientific purposes need not be more than 512×512 or 1024×1024 pixels. Larger image resolutions should be chosen if (for instance)

To discuss what resolution would be most suitable for your application, contact IDT now.